I hate most ads these days. The execution especially have become woefully bad. What might have seemed like a decent idea even till the storyboard stage, look disastrous post execution.

The Ford airbags ad is one such (sorry, I couldn’t find it on YouTube). There are two versions of this. One in which a 7 year old girl sitting in the backseat of an Ecosport makes a sad face and says “Papa, our car has airbags in the front, but I’m sitting in the back”. To start with, the casting of the kid is really bad. Neither does she look cute, nor does she look approachable and cuddle worthy (sorry little girl). Which is what you need to pull off the ridiculous question she just asked her dad. The little devil basically assumed her dad is a jackass of a driver and going to plunge them to their eventual deaths, and then went ahead and deduced that he is somehow okay with killing her and that’s why he chose to make her sit all by herself at the back. And no, she didn’t ask this in an adorable and sassy way a 3 year old asks these kind of questions. Because she is a freaking 7 year old. I know it looks like I’m hating on the messenger, but I’m actually hating the entire messaging system. The next thing that happens is of course the dad says our Ford car has 6 airbags and you’re safe, which is the point of this whole disaster of an ad. How he does not start weeping in absolute agony over the realisation that his daughter thinks he wants to murder her is beyond me. The voiceover calms everything down by asking you to check the number of airbags in a car before you buy one. Acceptable.

There is another shorter version of this ad, in which the girl is shown in closeup and she smirks and asks my Ford car has 6 airbags, how many do you have? That’s it. However, in these 10 second the character, whose only claim to existence is that she was born in a house which could afford a fully loaded version of a car, essentially shows you the birdie and laughs at your poor ass for not being able to afford a better car. Your kid surely deserves to die.

It has been a really long time since I have posted content from third party sites on my blog, but this one deserves a watch.

I have been a big fan of John Oliver for some time now thanks to the Bugle podcast he hosts with Andy Zaltzman. John’s show Last Week Tonight is one of the best shows on air today, globally. And the below clip is all you need to see to know why.

The anatomy of an advertising emergency [Infographic]

The world over. Any creative service.

It is quite known that celebrities help sell stuff all over the world. Well, they are celebrities after all.

Quite a few brands, especially Consumer Durable brands have used a liberal dose of celebrities. However, what has caught my eye of late is LG trying something weird. They have hired Akshay Kumar (who at the same time is also endorsing Micromax mobile phones!) to launch their 3D TVs. At the same time, they have also got John Abraham, Abhay Deol and Genelia D'Souza to endorse the LG Cookie. I don't get the sense in putting all these three celebrities in one single ad of average quality.
The plot of the ad is basically 3 friends who are just fooling around with each other. Firstly, it is quite difficult for me to think of John Abraham, Abhay Deol and Genilia D'Souza as good friends! They are not even in the same league as far as movies are concerned and none of them even do the same genre of movies! I don't really follow the tabloids, but I doubt they are pals in real life as well.
If this is not a case of Celebrity OD then I don't know what is!
Leave a comment
ads, Advertising, Cars, Marketing Gyan

Audi trying to ‘Break the Spell’

This is one of the most well made car commercials I have seen in recent times. I love the way it is attacking all the marquee and established manufacturers at the same time. This ad is made for the US market where Audi appears to be the underdog; and everyone loves the underdog.

Audi is trying to position itself as the rebel which offers all the choices that their competitors are offering under one brand and without the stereotype. It basically is telling people that you are doing nothing but conforming to stereotypes if you drive the other cars; and this would reflect directly in the statement you are trying to make about yourself. As I said in my last post, it is all about making a statement.

This commercial is an excellent example of how one can throw an open challenge to the established players in a cluttered market and try to change the thinking of the consumers to force them to choose your brand.

Finally, I love the way the R8 pulls up in the street for the kid to drool at. I just wish it was not silver! 😉

How to advertise a Supercar?

A business card can be something which is very simple and just has your contact details. But if you really want to get noticed and want people to remember you for a long time. You have got to get your card made like one of these 25. They are really eye catching and it you will surely remember the person who gives you one of these.

Out of all the media that brands use to advertise, I always had a soft corner for the print medium. It just requires more brilliance and lateral thinking to grab and then hold the reader's attention long enough to get across a message in one page. Also, it gives the reader their own time to connect with the ad in the way they want to or dont want to. And this creates a much bigger impact than a television ad.

Traditionally, print ads have been about the headline, the sub-headline and the body copy, with a picture in it. But, the ads that grab attention fastest are the ones with bold typography. Once, you have the attention, it is the job of the creative to hold and get the message across. Below are a few ads which have done this brilliantly. You really should see all of these awesome typographical ads.

Got these pictures in a mail from my friend Shrenik.

This is one of THE most creative campaigns I have seen. I dont think one needs to say much beyond that. Enjoy! 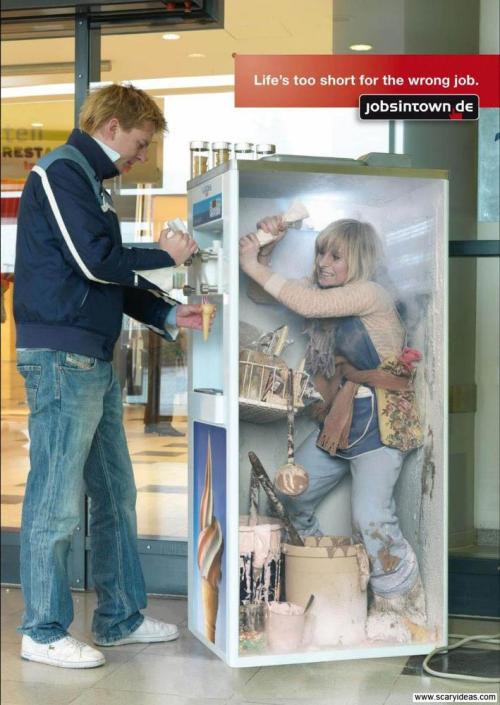 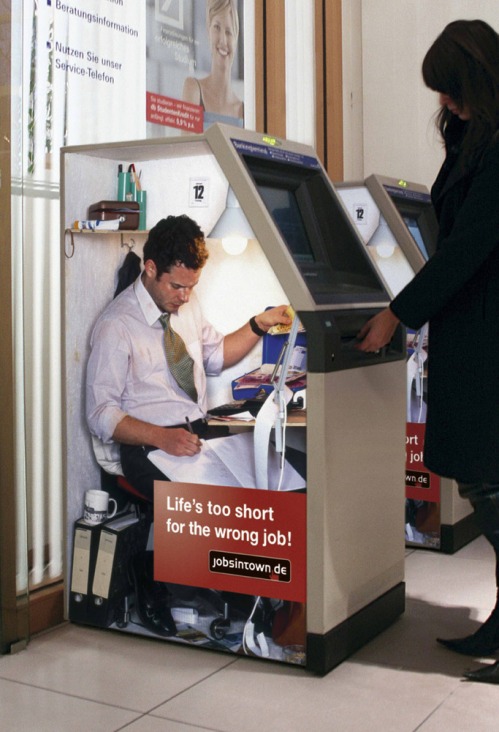 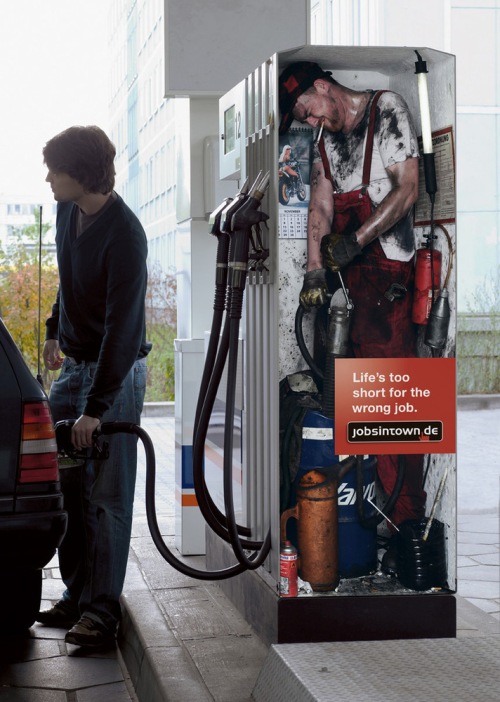